Here’s How You Can Support Solar this Election Year! 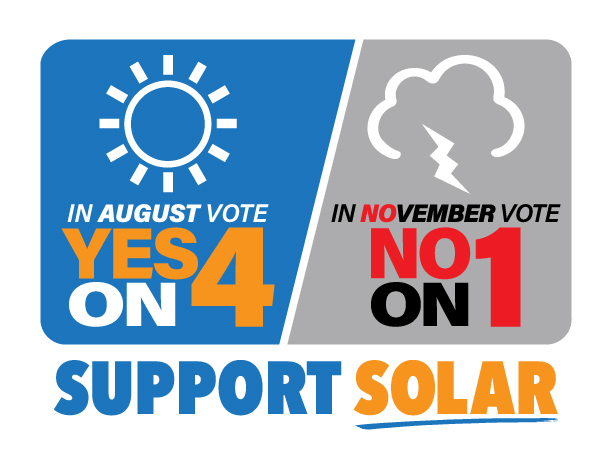 Rooftop solar is a benefit to ratepayers and utilities

While all eyes are on the 2016 Presidential election, the ballot on November and the primary in August will contain two amendments vital to the future of Florida.

The utilities mounted a slick advertising campaign, and paid an army of canvassers around the state to place an amendment on the November ballot that appears to be pro-solar, but which is anything but. Essentially, the amendment gives utilities the ability to regulate rooftop solar, which is like giving the fox the keys to the henhouse.

In other states, and even within Florida, utilities don’t view solar as a threat, and in these areas, like Orlando, the utilities actually add value to the distributed energy rooftop solar provides. FPL and JEA fall on the opposite end of that spectrum, and have worked vigorously to thwart the growth of residential rooftop solar in their service areas. The most common argument they use is that rooftop solar customers are subsidized by non-solar customers, going so far as to frame the issue in terms of class warfare and making the argument that solar is something that only elites can afford, and that those people are taking advantage of the poor. This is absurd. A recent article by the Brookings Institution, a non-partisan think-tank with a sterling reputation weighed in on this issue, and dismantled the argument made by utilities.

Findings from the Brookings Institution

Mark Muro, a Senior Fellow and Policy Director published an article in May which punches huge holes in the arguments that JEA and FPL propagate. He looked at studies performed by utilities around the country, and by Public Utilities Commissions (which regulate utilities) and combined the literature. Here is the central finding of Mr. Muro’s research:

Our utilities are grappling with how to adapt to the changing and evolving energy landscape.  The utilities that view distributed rooftop solar as a threat are looking at flat revenues and concluding that one way to solve that problem is by hitting solar customers with monthly charges and decreasing the buy-back rates. This is not the solution, and many utilities, states, and Public Utilities Commissions are reaching the same conclusion.

In Florida the discussion is clouded by the fact that the PUC is essentially in the pockets of the utilities themselves. Unless the utilities alter their way of thinking, embracing, rather than fighting residential rooftop solar, the issue will persist.

The fact is, net metering allows utilities the ability to sell clean energy to their customers without investing any money in infrastructure. Homeowners themselves are paying for the array and installation. Solar installations make expensive grid upgrades unnecessary, saving the utilities millions. Solar takes pressure off oil and gas generation at peak demand times, and lowers rates.

In 2014, Minnesota’s Public Utility Commission found that the value of solar was 3 to 3.5 cents more per kilowatt hour than the retail rates, when the cost of carbon and avoided costs of new power plants and gird upgrades was factored in.

Part of the problem in Florida is that the utilities increase revenue and profits by implementing costly infrastructure upgrades, so they tend not to factor these savings in when looking at rates for solar.

The solution is that the utilities themselves evolve and view themselves as distributors of energy, rather than the sole providers of power. This challenges the entrenched mindset that the utility should have a monopoly on generation. Only by looking at the available research and concluding that they’ve got to change their practices and overall outlook will this perception change.

What Can We Do?

Eventually, utilities, even in Florida, will embrace the spread of rooftop solar, it’s just a matter of time. They cannot stop the future, and solar is the future, here in the Sunshine State.