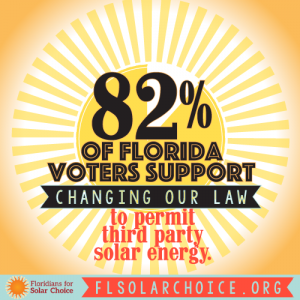 With almost 200,000 signatures still needed in order to meet the requirement for getting on the November 2016 ballot, Floridians for Solar Choice is now exploring options to get on the 2018 ballot instead. This is unfortunate for the approximate 80% of us who support FSC’s goals, one of which is to allow individuals and businesses (not just Florida’s utility companies) to sell solar electricity. What’s even more disappointing is how the opposing group, Consumers for Smart Solar, is able to get away with the intentionally misleading campaign and the cheap tactics being used to secure signatures. It’s dirty politics at its finest.

Floridians for Solar Choice is a grassroots effort formed from a mixed bag of Tea Party libertarians, renewable energy advocates, and environmentalists who all say it’s well past time for Florida to embrace the current trends in solar, which include allowing businesses other than utilities to sell solar power to consumers and giving homeowners the flexibility to enter into Solar Power Purchase Agreements with companies (a solar lease).

Consumers for Smart Solar, the opposition, has received millions of dollars in funding from the electric-utility industry; Duke Energy, Florida Power and Light, the Koch brothers, and others with vested interest in blocking the development of home solar and to continue to allow the utilities to maintain an oligopoly on energy generation in Florida.  According to the Energy and Policy Institute, “Consumers for Smart Solar is a utility and fossil fuel-funded campaign designed to confuse voters, attack the pro-solar Floridians for Solar Choice Ballot initiative, and protect the monopoly utilities.”

Meanwhile, state Rep. Fred Costello (R) from Ormond Beach, who is unaffiliated with either of these groups, has filed a bill that proposes ideas that are similar to Floridians for Solar Choice’s. If you enjoy reading the dictionary, you can read the entire bill, but in a nutshell, it would open the market to all forms of renewable energy, including solar, wind, and hydroelectric while also preventing discriminatory action by the utility companies. This bill is currently under review by the Energy & Utilities Subcommittee. One way you can help is to reach out to your State House Member; you can find information on who to contact here.

We hope restrictions on solar are eliminated in Florida, but regardless of what happens, buying your own solar energy system remains a smart option. With the cost going down as much as it has in the past few years, it’s probably much more affordable than you may imagine- especially if you haven’t spoken to a solar professional recently. When you crunch the numbers, you will understand why we say you can’t afford NOT to go solar.